May 11th, 2022: Tsartlip community members gathered for food and discussion at the Saanich Fairgrounds. Tsartlip’s first community meeting since the beginning of the pandemic was well attended and went from 5:00 pm until 9:30 pm. 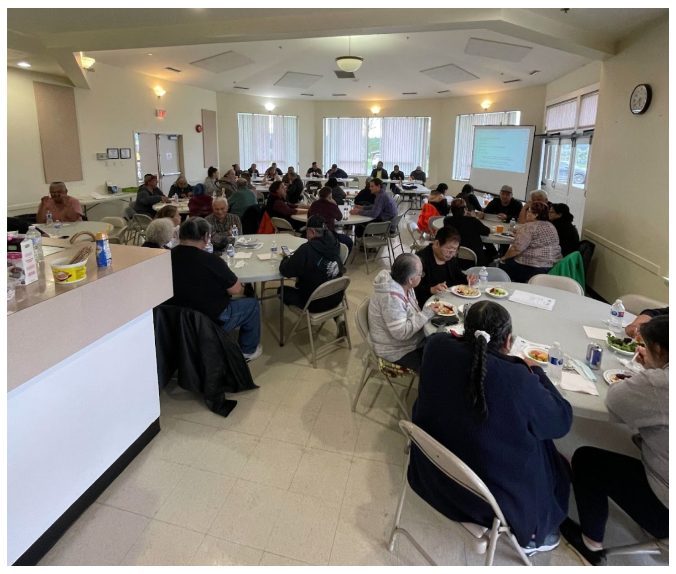 Shown above: The May 11th Tsartlip Community Meeting; the first since the pandemic

The community meeting was well attended

Chief and Council and Admin would all like to thank each and every attendee, with special thanks to Elder Dan Sam for leading the opening prayer and the planning committee members: Verna Ellsworth, Brenda Bartleman, Judy Bartleman, Yetsa Olsen and Jeanine Cooper for organizing such a successful event.

It was wonderful to reconnect, share a meal and discuss important updates in the community. It was especially valuable to have so many Elders in attendance who shared their experience and wisdom with all attendees.

Due to the length of time since the last gathering, there were a number of items brought up that were recorded and scheduled for further discussion at the next community meeting. That being said, half of the planned agenda was executed with a much-needed community update on MÁWUEĆ.

In December 2020, Tsartlip First Nation re-acquired MÁWUEĆ (also known as Woodwynn Farm), almost doubling Tsartlip’s land base. These lands were originally part of the W̱JOȽEȽP village site and were used by our ancestors for many purposes including

The 78 hectares were recently valued at just over $4.5 million dollars and are located within the District of Central Saanich, part of the Agricultural Land Reserve. Currently, MÁWUEĆ is zoned for agricultural use.

The current zoning under the Agricultural Land Reserve restricts land use and prohibits Tsartlip from using the land in many of the ways the community would benefit from.

As such, Council decided to proceed with adding MÁWUEĆ to Tsartlip’s reserve lands to allow Tsartlip the opportunity to eventually control and manage the lands, and permit more land uses.

In accordance with Council’s decision, Tsartlip submitted a Reserve Creation Proposal to Indigenous Services Canada (ISC) in May 2021. ISC accepted the proposal in late 2021. Tsartlip and ISC have started working together on the various steps required to add the lands to reserve.

Since the acquisition, Tsartlip, with funding from the province, has been remediating the land and creek, as well as managing several decrepit buildings on the site. Tsartlip is also renting the land out to a hay farmer while remediation is underway.  These steps will continue as well as consulting with First Nations and the District of Central Saanich to accomplish Tsartlip’s goals.

Once MÁWUEĆ becomes Tsartlip reserve land, the doors will open for Tsartlip’s use and management of the lands. The land could be used for many purposes that will benefit Tsartlip community members including:

Chief and Council wish to remind members that land-use decisions for MÁWUEĆ have not been made and will not take place without community consultation. More news will be released as it’s available.

The next community meeting is the Tsartlip Annual General Meeting, scheduled for August. Chief and Council look forward to the AGM, but also look forward to more community gatherings and more engagement as we emerge from the pandemic.

Update for the Food Card Distribution

Central Saanich is hiring for the General Local Election