This September 18th and 19th, the Geronimo Canoe Club (GCC) will host the annual war canoe race on home territory in Tsartlip. 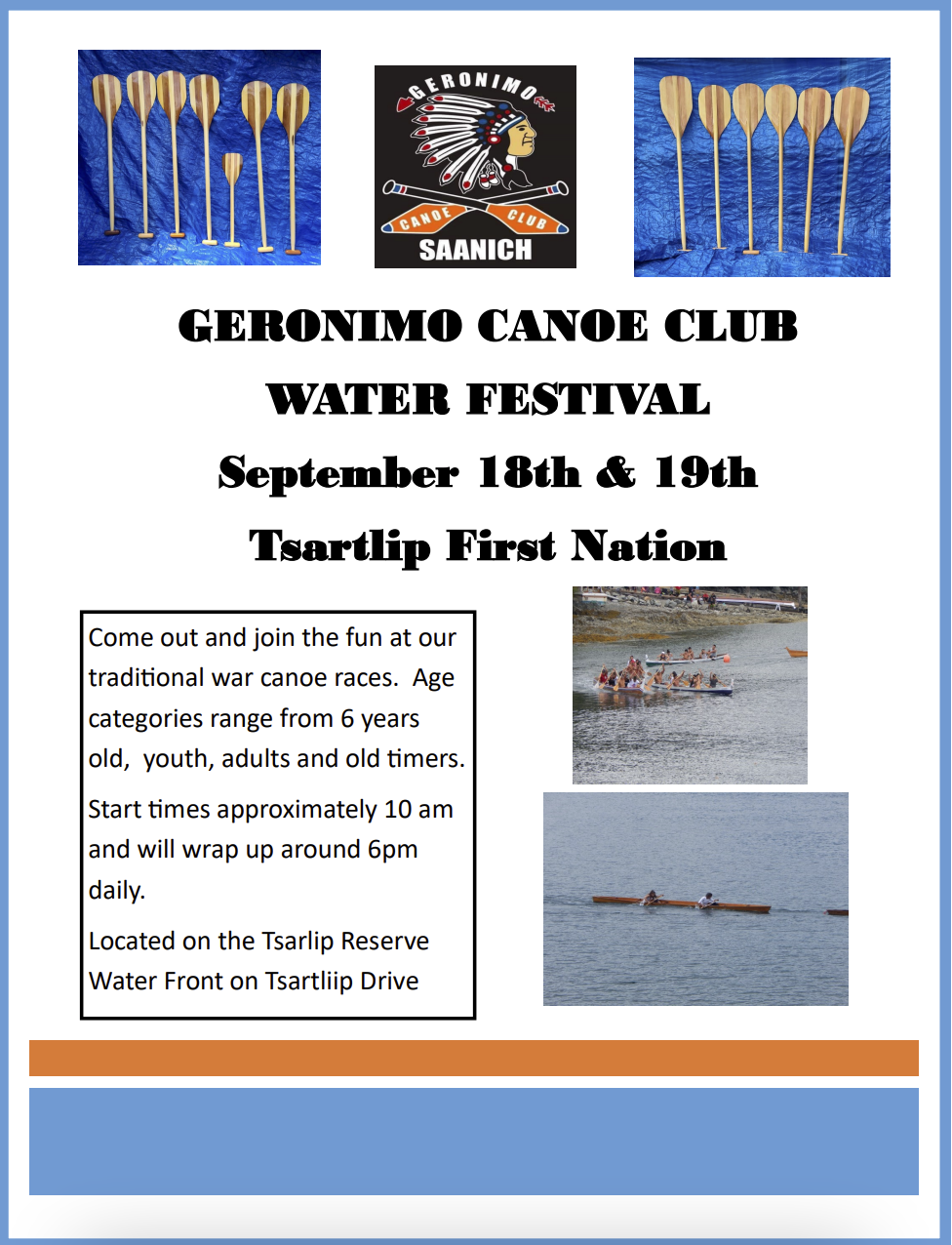 Traditionally, the GCC hosts the war canoe race each year and includes teams from Coast Salish communities as far south as Washington state and as far North as Nanoose First Nation. While the races were suspended last year due to COVID and can’t include community members from Washington State due to border closures, this year races are mostly back to normal and have been happening across Vancouver Island, the Fraser Valley and the lower mainland all summer.

Following a gruelling schedule of driving and racing, the internationally acclaimed GCC team has been representing Tsartlip and placing in the top three in almost every race since early July. They will continue to race until the end of September.

The war canoe races hosted on home territory will be on the weekend of September 18th and 19th, starting at 10 am each day and finishing around 6 or 7 in the evening. There is space for members of other paddling clubs to camp and a concession and porta potties are provided. All W̱SÁNEĆ community members are welcome to attend at no cost, the event is being held at the platform.

The 25 races scheduled for the weekend include those for children 6 and under, 10 and under (short sprints), children 13 and under who do ½ mile, Buckskins (youth) who do a half hour race, and the women’s team, who will also race for about 30 minutes. The men’s races are about 45 minutes. Each of the top three winning teams will receive cash prizes for placing 1st, 2nd and 3rd.

While the event is free for everyone to come and watch, Leonard Morris shares that donations are certainly welcome

“We have to rent the PA system and Port o Potties and between that and the cash prizes, it all adds up. Hosting the race here costs us $12,000 and when we travel to other races that doesn’t include food and accommodation for the GCC. We are actively fundraising and any kind of donations to make the races a success would be greatly appreciated.” 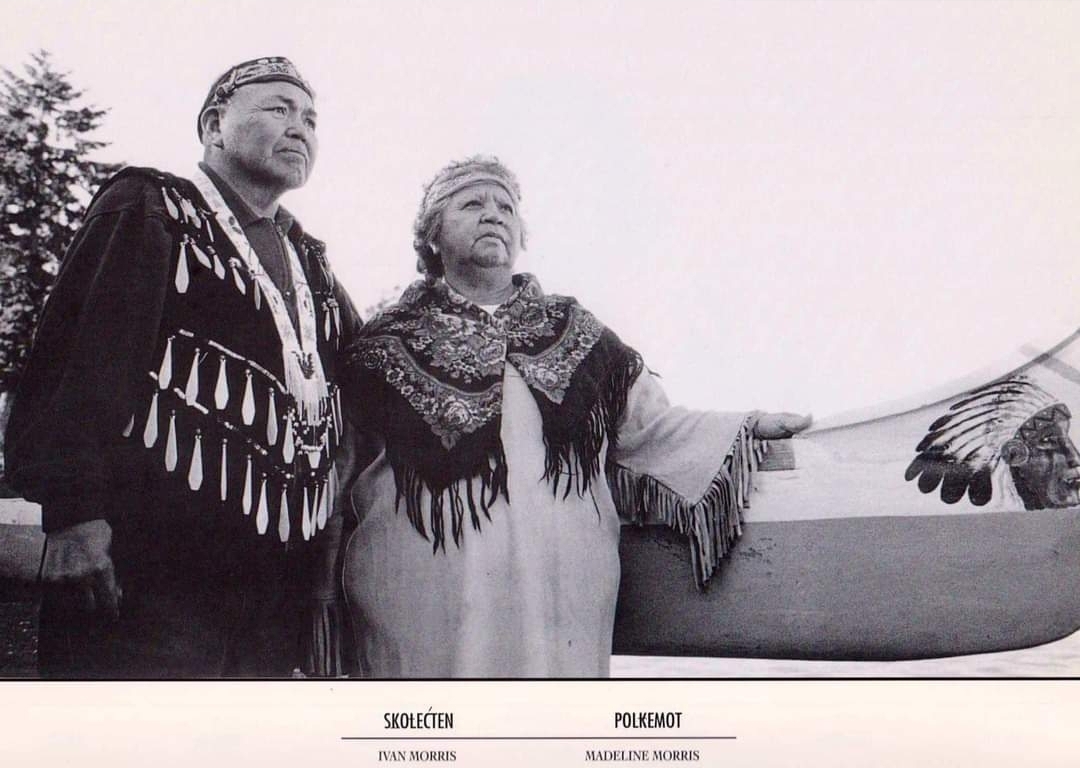 The Geronimo Canoe Club was founded by Ivan and Madeline Morris in 1974 to get their kids into war canoe racing.  Now they have grandchildren, great-grandchildren and great-great-grandchildren racing the war canoe circuit.  The Blue Canoe (Geronimo Canoe), as it is called, has dominated for many years in all categories of racing from men’s women’s and buckskin(16 & under). Leonard Morris Sr (now retired and manager) dominated the men’s single racing for many years, his son Leonard Morris Jr then started dominating and still does today in men’s single but with competition from Leonard Jasper Morris III, up and coming to also claim the title.

“We’ve been at the top for many years, and we are still in the top three.” shares Leonard Morris Sr proudly.

The GCC, against incredible odds, has represented W̱SÁNEĆ communities internationally and boasts two members who are the Canadian National champs as part of their club.

Follow the GCC fundraising efforts and online auctions on their Facebook Page or send an e-transfer to geronimocanoeclub@telus.net.

Follow the Geronimo Canoe Club through the remainder of September: 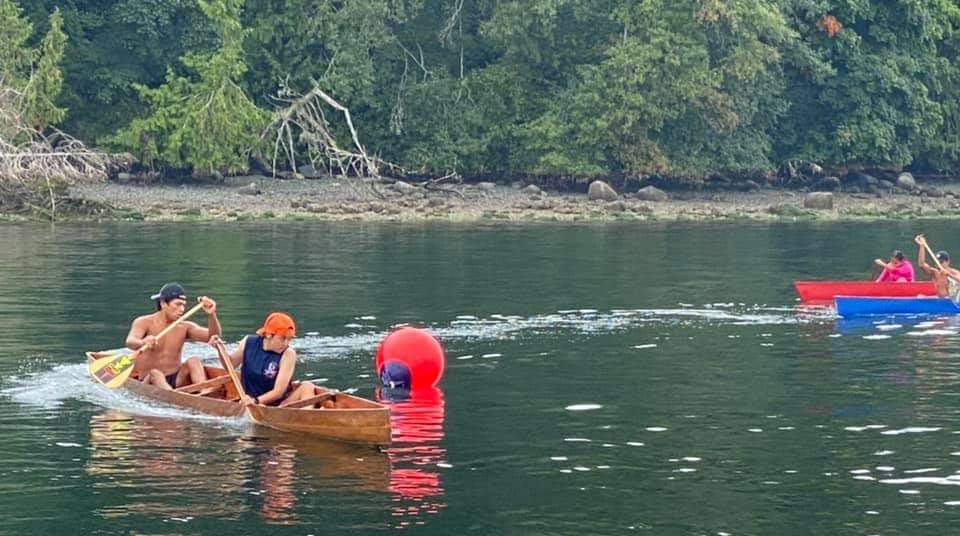