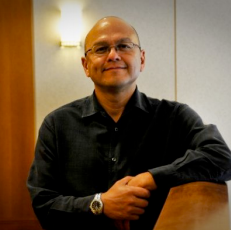 “I actually feel very lucky to have been raised by my grandparents.They had very little formal educationbut they taught me a lot.” He adds,“they were both very humble, very gentle, and very generous…and theseare qualities that I think many traditional indigenous peoples have.”

His career in business began with his first management job, at 25 years old working with an Aboriginal organization that had been awarded a province-wide contract. Within 18 months, he quadrupled their contract size, making his employer very happy! It was then Andrew knew he’d found his calling. From there Andrew went to university to obtain formal business training. Six years later, Andrew graduated with a Bachelors Degree and a Masters Degree in business. Since then, Andrew has continued his education taking training at Harvard University, among other institutions. About his impressive credentials, he shares,

“My formal education also taught me a lot- but is not the end-all. Things like Accounting, Business Law and Project Management are important tools. But you also have to remember where you came from and who you serve.” He adds, “without a foundation in your roots, business means nothing.”

Andrew is the principal of Andrew Leach and Associates, a business he started after graduation. He works exclusively with First Nation organizations. Since he started his business in 1999, Andrew has provided short term management and leadership support to 200 First Nations in 7 provinces, 2 territories, and 30 US Tribes.

“Having worked for Indigenous communities throughout North America and beyond, I have seen many things we all have in common” he says, “most notably “if someone else has control over your own affairs, you see the same results: poverty. And the more say you have in your own backyard, the better outcomes you will have.”

Andrew joined W̱JOȽEȽP as CEO in order to work with Chief and Council and Admin to develop and execute a strategic plan, provide management and change management support as well as stimulate economic development for the Nation and its members.

When he’s not working Andrew enjoys spending time with his family, travelling and commuting on his electric bike. Andrew also has significant experience with both bikram yoga and martial arts. “Martial arts and yoga have taught me the importance of repetition to train your body and mind and the importance of breathing and balance and focus. I apply these lessons to both my personal and professional life.” Andrew shares.

Andrew is the former temporary Administrator at Tsartlip, transitioning to CEO in February. Since February 1st Andrew has been entirely focused on assessing Tsartlip’s businesses to ensure Tsartlip’s long term viability, both in terms of job opportunities for the members and creating wealth for the nation. “We are committed to hiring and training as many members as possible for employment.” Andrew shares. Since he began

as CEO, Andrew has hired 10 members for new jobs created within the community.

Chief, Council and Admin are all very pleased to add Andrew’s expertise to the team and are excited to work with him.

“On behalf of Council, I welcome Andrew to Tsartlip.” Chief Don Tom shares “his breadth and depth of skills and experience is well suited to help us strengthen our existing businesses and get to the next level.”