The ȽÁU, WELṈEW̱ school expansion project makes progress towards fulfilling the dreams of the Elders.

Multi-year project spearheaded by the W̱SÁNEĆ School Board 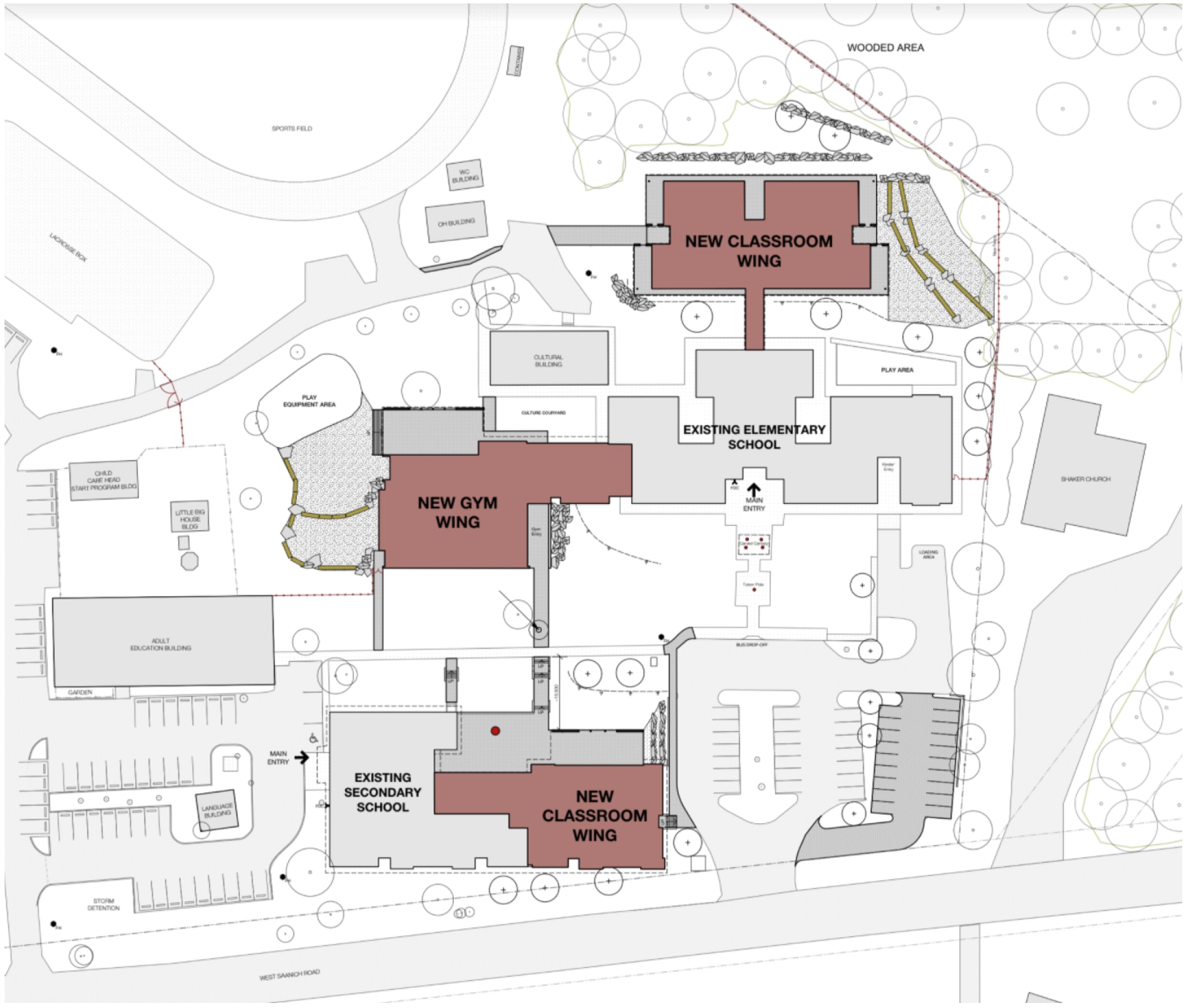 Shown above: the current school (in grey) and the in-progress improvements (in red)

The ȽÁU, WELṈEW̱ school expansion project is a multi-year project spearheaded by the W̱SÁNEĆ school board to improve outdated facilities, create more space for one on one work with students and support further SENĆOŦEN immersion.

The project began with feasibility studies in 2017. The studies found that students in both tribal (elementary) and leadership (secondary) schools were experiencing severe space shortages leading to overcrowding. In addition, the current buildings had major functional shortcomings and technical failures. The gymnasium in particular was problematic due to it’s elementary school size and leaking and sinking floor.

“The expansion helps us to deal with the overcrowding we are dealing with now. Especially with special education. In the past we had one-on-ones happening in the hallways and the laundry room. This expansion has a more definite focus on bringing

in one-on-one breakout rooms. It’s going to have a real impact on the 200+ students at the school.” shares Curtis Olsen, the School Board Administrator.

When complete, the school will have a total of 2,871 square metres of new space; not only making room for the existing student body, but also increasing the school’s capacity for new students.

The expansion of the school is designed to facilitate the delivery of First Nation’s specific content. Olsen shares, “In the past we have heard our elders say it was their dream to have First Nations in control of First Nations education. Delivering more First Nations content is important to our people. And that includes outdoor education and practical education, ensuring we can get out on the land”

The school expansion is slated to be complete in 2022. The design and construction plans were designed to minimize interruption for current students.

The new construction also supports the expansion of the SENĆOŦEN immersion curriculum which began with the late Phillip Paul,  who as the administrator, introduced SENĆOŦEN into the Tribal school in the late 80’s along with Board Member Marie Cooper and language holder and SENĆOŦEN alphabet creator Dave Elliott Sr.

Currently full immersion is available from grade 1-5. After that, the students may continue with a program of half immersion. The new immersion wing will support the laddered immersion program up to grade 12 and beyond which will support students to become completely bilingual. SX̱EDŦELISIYE (Renée Sampson), the SENĆOŦEN program facilitator for both the ȽÁU,WEL,ṈEW̱ Tribal School and the W̱SÁNEĆ Leadership School shares, “It is the SḰÁLS Ć,SE LÁ,E TŦE SELW̱ÁN (dream of our elders) to have our language taught and have it taught by W̱SÁNEĆ teachers, so the students have our worldview.”

The new facilities also represent a continued investment in the excellence of W̱SÁNEĆ young athletes. Instead of competing in an elementary sized gym, both male and female athletes will have more than enough space to play futsal and practice their soccer skills, all while they are cheered on by their community. The increased size includes bleachers which will enable W̱SÁNEĆ to host sports tournaments in the future. In addition, the space will also be available to host cultural events and all kinds of other community events as well.

“The ȽÁU, WELṈEW̱ school expansion project is one of, if not the largest project in W̱SÁNEĆ history at over $20 million. It’s going to be an incredible facility and a huge resource for the entire community when it’s completed.” Gord Elliot, one of the project managers shares.

The successful management of such a large and lengthy project is due to the hard work of many. The ȽÁU, WELṈEW̱ school expansion project committee includes team members:

Managers from the schools:

The project team mentioned above is integral to managing ongoing project developments, in order to make decisions about the project as it develops. In spite of challenges due to the pandemic, the project is proceeding relatively on schedule and on budget. In fact, due to the persistence and tenacity on behalf of the school board, they just obtained approval for an additional $1 million to complete renovations to the existing school wings, in order to ensure there will be fluid and safe movement between the new and old parts of the school.

To stay up to date on this project and others, sign up for our newsletter.